McLean’s Creek runs through the very heart of the Daintree Discovery Centre and is an abundant and diverse source of life.

With royal blue necks and shaggy, jet-black feathers, cassowaries look like no other birds on planet earth.

They are what is known as a keystone species, responsible for literally helping to grow our very precious Daintree Rainforest.

The Spiny Rainforest Katydid is a very unusual rainforest katydid.

The body and legs have numerous thorny spines and antennae are very long.

The insect is greenish above with different shades of green and brownish colours providing excellent camouflage; the underside is pale.

How many steps does it take to get to the top of the 23 metre high Canopy Tower at the Daintree Discovery Centre?

112 to be exact, but it is well worth the effort, with views for miles and the sound of some of our most beautiful songbirds.

The research is part of long term, Australian-wide monitoring of different ecosystems to discover how they are responding to environmental pressures.

The Daintree Discovery Centre has announced its continued sponsorship of the work, pledging $6000 a year to James Cook University until 2028.

“The Daintree Discovery centre site includes camera monitoring to identify wildlife. Phenocameras face out over the canopy and take hourly pictures to track the seasonal changes in the leaves and flowers of the rainforest,” he said.

There are 10 major sites in Australia collecting information on fauna, flora, climate and carbon flux.

Mr Arnold said towers at the site house instrumentation to measure exchanges – or flux – of carbon dioxide, water vapour and energy between the terrestrial ecosystem and the atmosphere.

“This important research will uncover the changing carbon and water balance in the Daintree Rainforest as it copes with climate change.”

The Daintree Discovery Centre’s contribution to the research project, including this latest agreement, will total $120,000.

The information provided by the Australian SuperSites contributes to data collected by more than 400 towers around the world, known as FLUXNET.

Cassowaries are an endangered species found throughout the rainforests and nearby woodlands and swamps of North Queensland.

These large flightless birds play an important role in the dispersal of rainforest plant seeds.

Cassowary populations face a variety of threats and, as habitat disappears, human contact with cassowaries is increasing.

• Always slow down when driving in cassowary territory.

• Always keep dogs behind fences or on a leash.

Ever seen an Australian Tarantula hunt its prey?

She has settled in very well, and some days she even shows us her hunting prowess:

The Giant Rainforest Mantis (Hierodula majuscula) is one of Australia’s largest species.
Adult females can reach 70mm in body length and are very powerful.
In the wild they prey upon a wide variety of insects, and other invertebrates.

They are capable of catching small geckos and frogs if the opportunity arises.
As nymphs their colours vary, ranging from red-brown through to bright green.
By the time they mature they usually adopt a rich leaf-green colour.

But when the bird in question is the remarkable yet rare cassowary, those droppings should be promoted in the nicest possible way – its poo literally grows trees.

And the extremely popular bags of “Cassowary Poo” sold at the Daintree Discovery Centre are doing just that. The cassowary is much more to the rainforest than its largest and most exotic animal.

The birds eat fruit and fungi and as the material passes through their digestive system only the seed is left to be dropped and germinate in another part of the forest away from the mother tree.

Many rainforest species only grow from cassowary droppings. Daintree Discovery Centre manager Abi Ralph said the “poo” shows how vital the birds are to the rainforest in a way that appeals to children and adults alike.

“We were looking for something inventive for World Cassowary Day 2016. We had little bags of colourful chocolate, but due to our weather, we found they were melting.

“Now Cassowary Poo, which has been trademarked, has grown into this wonderful product that gets people talking and raises awareness of this crucial but endangered species.

“We can also supply Cassowary Poo wholesale to other likeminded businesses or businesses within Cassowary territory,” she said.

As well as being an enlightening treat, each packet of Cassowary Poo sold means a donation to Rainforest Rescue, which helps protect the Daintree environment, including restoring corridors for wildlife to move around freely.

The world’s oldest rainforest has so much to offer, even we don’t get to see everything despite being lucky enough to experience the Daintree every day.

We are therefore always excited to discover your #discoverthedaintree and #daintreediscoverycentre Instagram pics – thank you for all the #hashtagging!

Through your eyes, we saw the Daintree River winding it’s way towards Thornton Peak, marvelled at Sunbirds, Boyd’s Forest Dragons and Ulysses Butterflies, learnt more about cassowaries – they are tall! – and got to stop by the beach as well: 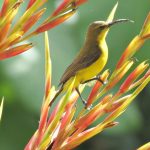 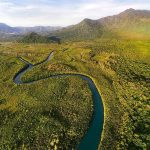 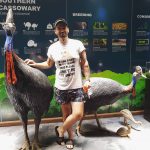 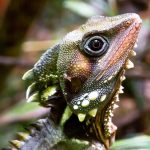 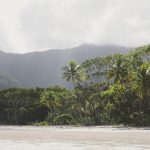 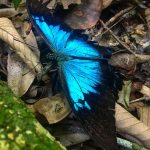 PS:  Did you know that ‘Kasu-weri’ means ‘Horned Head?